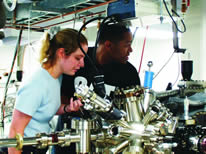 The student/advisor selection procedure begins with the department's admission requirement that a professor be available and willing to work with the prospective student. The name of the major advisor is provided to the Graduate School at the same time that admission to the department's graduate program is granted. Therefore, it is suggested that prior to applying, all prospective students contact faculty members with whom they share mutual research interest. The major advisor‑graduate student working relationship is a very important factor in determining the quality of the graduate education experience. It is essential that the prospective student and major advisor have open honest discussions concerning the expectations of each relative to the other before final selection is made.

Remember, however, that the selection process is mutual; that is, the professor also chooses the students with whom he or she wishes to work. In addition, the interest of the major advisor is, by necessity, often driven by research contracts. Thus, the research area chosen by the student is expected to fit into the overall research program of the advisor. If the student wishes to change major advisors, the request should be made both orally and in written form to the department head for approval. The department head will consult with all parties involved before establishing the conditions, if any, under which the change may be made. Similarly, the student should consult with the department head in situations where his or her major advisor is unable to continue to serve in that capacity.